These dedicated warriors train endlessly to perfect their sword techniques.
They channel their high Agility and Physical Strength stats into direct and area attacks like
Twisting Slash, Death Stab and Rageful Blow. 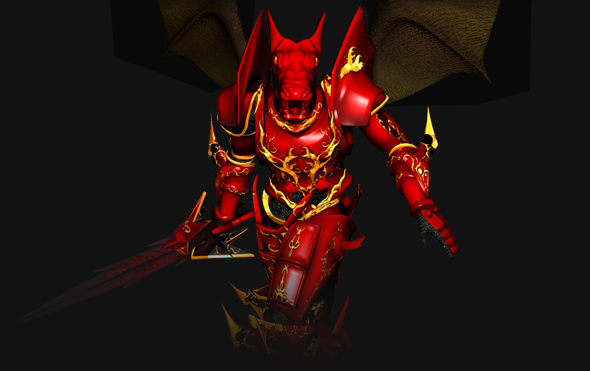 Defensive Skill
By positioning himself in a defensive posture, a dark knight can reduce the damage taken from enemy strikes by 50%.It proves very useful when besieged by too many enemies to effectively counter.
Falling Slash
The falling slash gives twice as much damage than any other regular attack of a Dark Knight because he uses his whole body to increase the strength of the blow.
Cyclone Slash
Many Dark Knights have been able to master this skill.
It consists of swinging a sword in a wide arc thereby generating enough centrifugal power to cause more damage and increase attack speed.
Lunge
Dark Knights who use the Legendary Sword, Gladius and Katana with a lunge skill can execute quick stab attacks on their enemies.
Moreover, it penetrates deeply through an opponent's armor into the vital parts of the opponent.
Uppercut
It cleaves into an enemy through an upward slashing motion.
While it may look simple and fluid, it takes a lot of dedication to master it.
Slash
It is a dreadful skill that uses both blades of a sword to cut an enemy.
It is a skill of high difficulty that only a Giant Sword, Chaos Dragon Axe and Crystal Sword can handle. Monsters who are attacked by this skill are damaged 2 times more than the other attacks.
Impale
This technique allows the knight wielding a spear weapon to impale his opponents for massive damage.
Twisting Slash
A technique that allows the knight to whirl his weapon around him to attack all adjacent targets.
Death Stab
A devastating attack similar to the lunge skill but is enhanced by the elemental power of wind.
Greater Fortitude
This technique allows the knight to use his energies to give him more stamina for battle.
Earth Break
An area attack that unleashes shockwaves with the elemental power of the earth to damage opponents.