What is Chaos Castle?

Chaos Castle it’s the place where mu warriors fight for prestige or prize,but there can be only one winner. To join the event you must find/buy Armor of Guardsman from NPC’s and right click on it, you are disguised to look like your enemies, where no one will be able to tell who’s who. A minimum of 2 players is required for event to start. 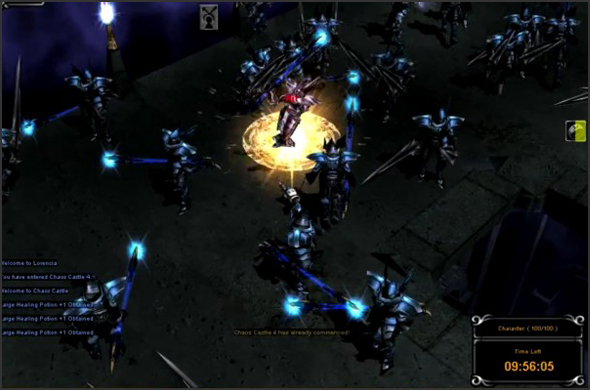 How to enter Chaos Castle

The Chaos Castle is separated into Levels Restrictions

The character will resurrect in Devias when he gets killed

Monster's appearance is same as the players
The number of monsters will change depending on the number of participants in Chaos
Castle . (Minimum 30-98)
There are monster that explode when they killed and once they explode the character beside the monster will beknocked back and the character will get slightly damage.

How the character can die

Quest will be over when all other players are dead.
When all the monsters are killed and only one player remaines by the closing time.
Ranking will be decided according to the points when there are more than 2 players remaining after closing time